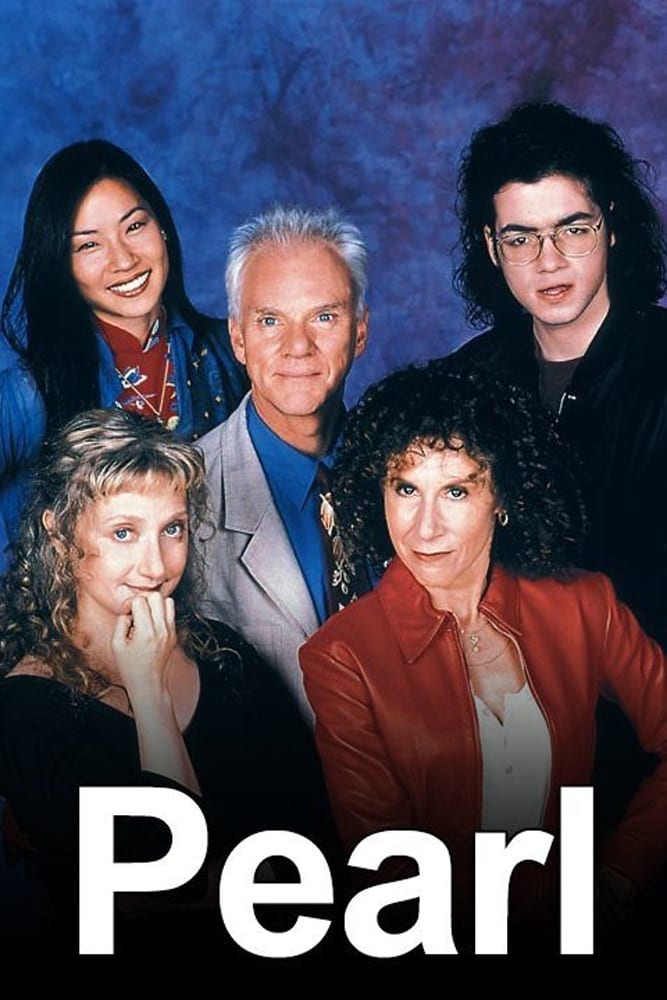 Pearl is an American television sitcom which aired on CBS from September 16, 1996 until June 25, 1997. The series starred Rhea Perlman, in what was her return to television after the conclusion of her long-running series Cheers three years earlier. Don Reo created the series, and Perlman served as an executive producer alongside Reo, Paul Junger Witt, Tony Thomas and Gary S. Levine. Pearl was produced by Impact Zone Productions and Witt/Thomas Productions in association with Warner Bros. Television.

Campus Ladies is an American sitcom that premiered on Oxygen on January 8, 2006. It stars Christen Sussin and Carrie Aizley as two 40-something women who decide to go enroll at the fictional University of the Midwest. The humor comes from the various situations the "ladies" get involved in while trying to fit in with their much younger friends and classmates.

The Gertrude Berg Show is an American sitcom that aired on CBS from October 4, 1961 to April 5, 1962. The series centers on Sarah Green, played by Gertrude Berg, a 62-year-old widow who enrolls to college.

Mrs. G. Goes To College is an American situation comedy which aired on CBS from October 4, 1961 to April 5, 1962. The series starred Emmy Award-winning actress Gertrude Berg.

The Parkers is an American sitcom that aired on UPN from August 30, 1999, to May 10, 2004. A spin-off of UPN's Moesha, The Parkers features the mother-daughter team of Nikki and Kim Parker. The Parkers' signature "Heeyyy" greeting became very popular in the early 2000s.

Three fabulous, eccentric, LA best friends of a certain age have their lives changed forever when their plane unexpectedly lands in Cleveland and they soon rediscover themselves in this new "promised land."

Follow the lives of a group of students at what is possibly the world’s worst community college in the fictional locale of Greendale, Colorado.

As Time Goes By

Well-educated and upper middle class, Maude Findlay is the archetypal feminist of her generation. She lives in suburban Tuckahoe, New York, with her fourth husband, Walter, their divorced daughter, Carol, and grandson Phillip.

A Different World is an American television sitcom which aired for six seasons on NBC. It is a spin-off series from The Cosby Show and originally centered on Denise Huxtable and the life of students at Hillman College, a fictional mixed but historically black college in the state of Virginia. After Bonet's departure in the first season, the remainder of the series primarily focused more on Southern belle Whitley Gilbert and mathematics whiz Dwayne Wayne. The series frequently depicted members of the major historically black fraternities and sororities. While it was a spin-off from The Cosby Show, A Different World would typically address issues that were avoided by The Cosby Show writers. One episode that aired in 1990 was one of the first American network television episodes to address the HIV/AIDS epidemic.

Set in the world of fashion and PR, immature fun-loving mother Edina Monsoon and her best friend Patsy drive Eddie's sensible daughter, Saffron, up the wall with their constant drug abuse and outrageous selfishness. Numerous in-jokes and heavy doses of cruel humour have made this series a cult hit in the UK and abroad.

Jules Cobb is a mom in her forties facing the often humorous challenges, pitfalls and rewards of life's next chapter. Along for the journey is her son, her ex-husband, her husband/neighbor and her friends who together make up her dysfunctional, but supportive and caring extended family... even if they have a funny way of showing it sometimes.

Roomies is an American sitcom that aired on NBC from March 19, 1987 to May 15, 1987. Reruns of the series later aired on Saturday morning.

Charles in Charge is an American sitcom series starring Scott Baio as Charles, a 19-year-old student at the fictional Copeland College in New Brunswick, New Jersey, who worked as a live-in babysitter in exchange for room and board. Baio directed many episodes of the show, and was credited with his full name, Scott Vincent Baio. It was first broadcast on CBS from October 3, 1984 to April 3, 1985, when it was cancelled due to a struggle in the Nielsen ratings. It then had a more successful first-run syndication run from January 3, 1987 to November 10, 1990, as 126 original episodes were aired in total. The show was produced by Al Burton Productions and Scholastic Productions in association with Universal Television, and distributed by NBCUniversal Television Distribution and New Line Cinema Corporation.

The Abbott and Costello Show

The Wayans Bros. is a situation comedy that aired from January 1995 to May 1999 on The WB. The series starred real-life brothers Shawn and Marlon Wayans. Both brothers were already well-known from the sketch comedy show In Living Color that was aired from 1990 to 1994 on Fox. The series also starred John Witherspoon and Anna Maria Horsford.

Boy Meets World is an American television sitcom that chronicles the coming of age events and everyday life-lessons of Cory Matthews, a Philadelphian who grows up from a young boy to a married man. The show aired for seven seasons from 1993 to 2000 on ABC, part of the network's TGIF lineup. The entire series has been released on DVD, as well as on iTunes.

The adventures of relatable and adventurous Riley Matthews, the tween daughter of Cory and Topanga Matthews, and her bold best friend Maya as they traverse the twists and turns of teenage years at Manhattan's John Quincy Adams Middle School where Riley's dad is their History teacher.

The series stars Gary Coleman and Todd Bridges as Arnold and Willis Jackson, two African American boys from Harlem who are taken in by a rich white Park Avenue businessman named Phillip Drummond and his daughter Kimberly, for whom their deceased mother previously worked. During the first season and first half of the second season, Charlotte Rae also starred as the Drummonds' housekeeper, Mrs. Garrett.

The adventures of the last human alive and his friends, stranded three million years into deep space on the mining ship Red Dwarf.